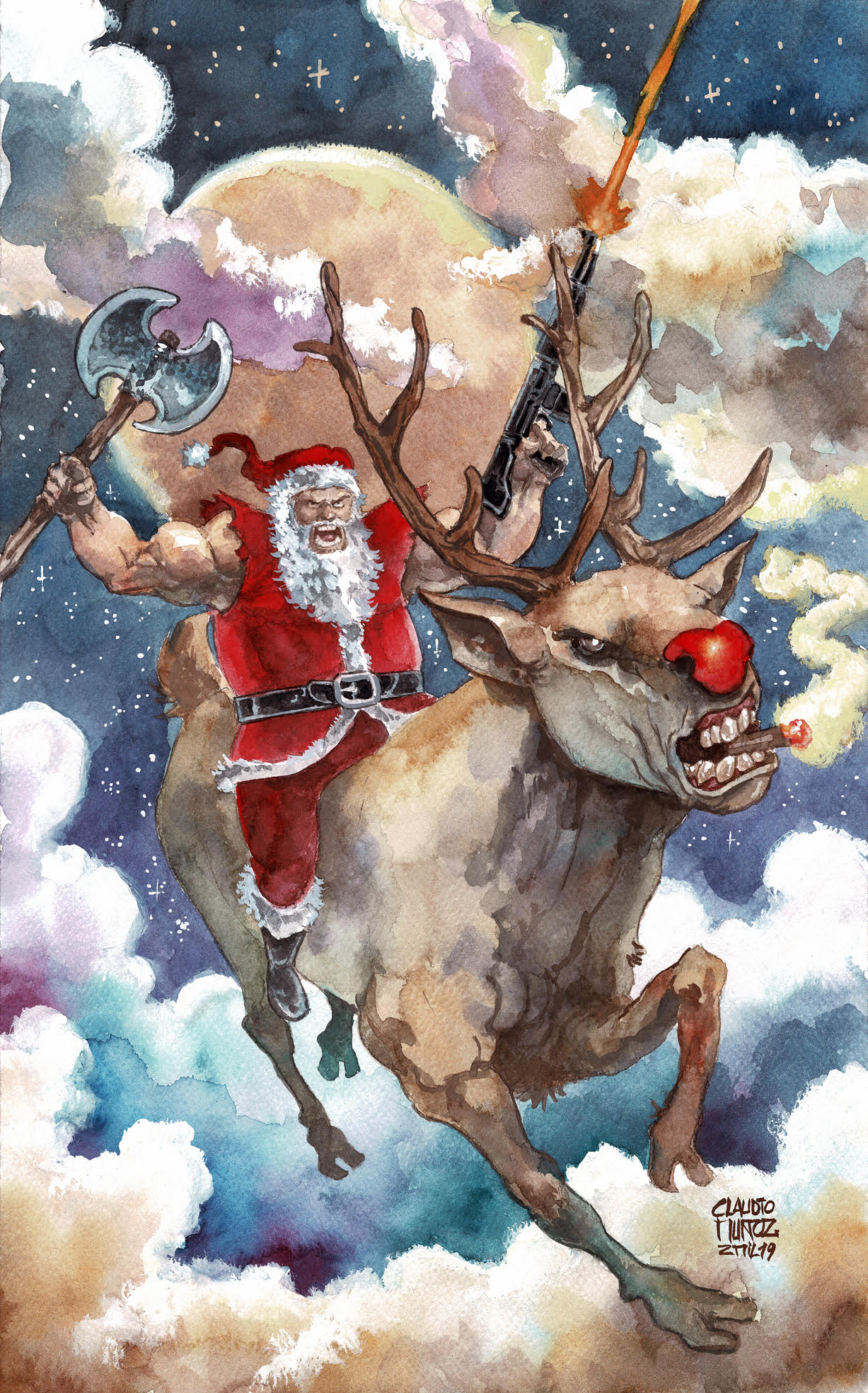 Nick woke from a heady dream of elfs and candy canes and something called a ‘snow-ball-in-the-bauble.’ He snapped on a magic-lamp and the bedroom filled with a glittery light. He stared long and hard at his fluffy red coat—lazily draped over his Big Boy Armchair—but resolved to not put it on; he wanted to feel the cold of the Lapland on his skin today. He kissed his sleeping wife and slunked out from bed, naked as a jay-bird. On tip toes, he made his way to the door, where he snapped his fingers, turning the magic-lamp back off.

The reindeer were fed and watered by the elfs last night so there was nothing to do, not really, nothing to take care of.

He walked the long, Art Candy de Chocolate corridor to the door that would let him out onto the deck.

Oh, Christ, another trip to the Earthlings, he thought glumly to himself.

Right before the door to the deck, he fingered the coffee-o-matic, a machine the elfs had built for him and had insisted be installed at every portal to the world—door in Human parlance. The machine burred gently; it ground beans with magic, but it used physics to squeeze the water through the grounds; apparently, so they elfs had told him, magic was no good for getting that rich, decadent crema he so loved and enjoyed on his mornings.

Coffee in hand, he front-kicked the door to the deck open.

Fuck! he cried inside himself. I fucking hate it!

The deck was covered in snow—like every fucking day—and he found himself leaning on the elf cut marble balustrade, the elf-espresso letting out wisps of white, his breath too, misting in the cold.

Oh Christ, he said to himself, staring out at the curtain of light that was the magical northern lights, Do they really care anymore? Do they really even want a Christmas? What does it mean to have a Christmas when no one believes in magic? All they care about is their science! ‘Can science feel love!’ he roared at the magical lights! ‘CAN IT!’

Naked, he still only barely felt the cold on his skin. It wasn’t snowing, with the sky clear—the lights whorling away in their twisted and demented and beautiful way—the air was much colder, but still he did not feel it.

The coffee was gone. He turned away from the lights to head inside and found an old friend on the deck, smoking a HOLY SMOKER GREEN CUSH—about as long as a middle finger of a 6 7 man—and smiling.

‘Jesus, Jesus, you can’t sneak up on me like that—I’ll kick the shit out of you.’

Jesus smiled—his loose, white robes flickered in the light, bright against his brown skin. ‘Don’t worry, Saint Nicky, am only here to pass the joint, you know?’

Nick smiled, looked off in one direction, not really looking at anything, then shook his head. ‘Uh-huh.’

‘You is naked as a jay-bird,’ Jesus said.

Nick walked over, saying, ‘Pass me the joint.’

Jesus drew hard once, the cherry glowing a nice orange, and then passed it over.

Christ, Nick said to himself, this motherfucker smokes the strongshit, don’t cough. He sucked hard, blew a rash of smoke out, no cough. He held back a smile.

Jesus drew hard. Nick had always known him as a smoker. Probably, he thought, because his Daddy invented that shit; or was it evolution? Who knows.

‘Talk,’ Nick said. ‘Yeah yeah yeah. We can talk all you like but I don’t know what good it’ll do.’

Jesus passed the joint back to Nick. He held it for a time, just staring, watching it burn.

Jesus said, ‘I’ve been doing a lot of thinking.’

‘Uh huh,’ Nick said—his focus on not trying to cough. ‘That makes a change.’ He blew the rash of smoke out in the shape of a mobius strip. Took him a long time to get that one right.

‘Yeah— I have. And I think we gotta just keep going. You know? We don’t got a choice.’ Jesus eagerly took the joint back. ‘It ain’t about belief, it’s about giving and shit. Being good to each other.’

Saint Nick laughed at that. ‘Good to each other—ha.’

‘It is, man, my white bearded friend. It’s all about giving. You get me—I don’t need to ask if you do.’

Nick sat himself down now—his big baubles cold on the snow-covered recliner. ‘Uh huh,’ he said.

Jesus smoked the herb like anyone else, but he did it with class, style, like it was the last joint he’d ever smoke. Nick had stolen that easy-cool from him many hundreds of years ago.

‘Alright,’ Nick said. ‘You’ve got my attention, Jesus Christ the Saviour … but I still want you to fuck off. I’m not doing it.’

‘Chirst,’ Jesus Christ said. ‘You are in a bad mood. Look at you: fat, healthy, a black belt in Jiu Jitsu, a god damn honorary Brother, in love with a magical woman too—and you still fuck about with the Why, Hows, and Whats of being a good motherfucker. You is a dumb cunt, my friend. A very dumb cunt.’

Nick laughed hard. He hadn’t laughed that long in a good long time. He missed his friend. ‘What about North Korea? Syria?’

Jesus took a short hit of the joint, passed it over. He laughed into a fist. ‘Man, those brothers and sisters need our love now more than ever.’

‘So?’ Christ the Redeemer said, taking the joint back; ‘Wanna go give the world some love?’

Nick thought for a moment, stole a glance at the lights in the sky, sighed, and said, ‘Doesn’t look like I got much of a choice.’

Artwork by the great and powerful Claudio Muñoz